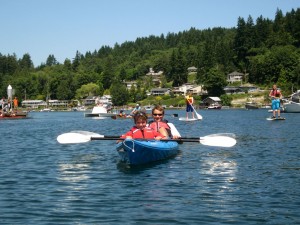 Yesterday we all piled into the van and headed down to the harbor so that the kids could get together with some friends and have an hour of kayaking in the harbor.  Elisha was hesitant, at first, but then he was up for the adventure.  He still has not shaken off the images from “Soul Surfer” and the shark attack the main character endured.  I had no intention of showing Elisha that movie-especially before we were to embark on a Pacific northwest adventure…but he snuck a peek at that movie on an evening he should have been snug in his bed, and the images of that fated shark attack are burned in his brain.  He was becoming convinced that a kayak adventure could turn quite bloody on the harbor  called “Gig”.  I loved the way my sister in law, laura, calmly gave him the nautical facts about the safe harbor they live near, and left the decision up to him.I have come to really appreciate my sister in laws calmness.  She is steady, and in the midst of lots of bustling activity with four children (pre-teens and teens) two golden retrievers, and a menagerie of other animals.  Elisha is in the mix of all this, and is loving every second.  He will love visiting Uncle Matt in San Francisco, but will go through cousin withdraw, for sure.